Menu
Welcome visitor you can login or register 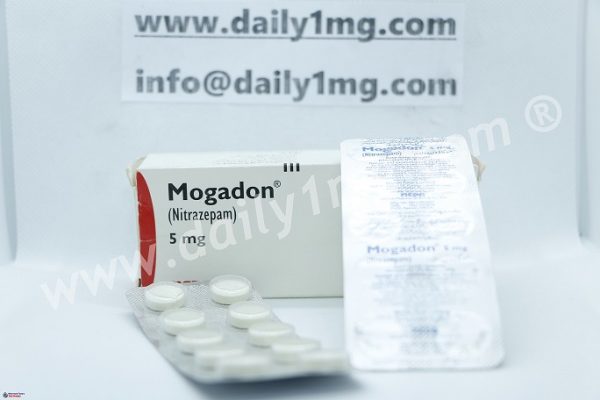 For the Treatment of Sleep Disorder Anti-Epileptic Agent

Steep disorders: Short-term treatment of insomnia. Benzodiazepines are only indicated when the disorder is severe, disabling or subjecting the individual to.extreme stress.

Sleep disorders: When taken in the evening Mogadon induces a deep sleep of six to eight hours duration.

Epilepsy: Mogadon is suitable for the treatment of infantile spasms (West’s syndrome) and atypical absences (Lennox-Gastaut syndrome). Like all other medicines for’the treatment of petit mal, Mogadon should be administered together with barbiturates or hydantoins in order to prevent convulsive episodes in latent grand mal.

Nitrazepam, the active ingredient of Mogadon, is absorbed from the gastrointestinal tract, the degree of absorption being subject to individual variation (60-90%). 40-80 minutes after the administration of 5 mg Mogadon the peak plasma levels of 40ng/ml on average are ‘Teacrie^^^younger persoris’ the vdrumeof’arslnb’ufioh Fs S’l/Rg, 2 hours after administration, the concentration of Nitrazepam in the cerebrospinal fluid is about 8% and after 36 hours approximately 16% of the concentration in the plasma. The CSF concentration thus corresponds to the non-protein-bound fraction of active ingredient in the plasma.

The elimination of nitrazepam from the blood is biphasic. The mean elimination half-life is 30 hours, and this figure does not change during long-term administration. With an uninterrupted dosage of 5 mg Mogadon daily, a steady state is reached around day four with plasma concentrations of 40-60 ng nitrazepam per ml. Only a small percentage of oral doses of Mogadon appears in the urine as unchanged nitrazepam. The active ingredient is reduced in the liver to the 7-amino compound, which is metabolized in turn to 7-acetamidonitrazepam. In elderly patients, the volume of distribution is greater and the mean elimination half-life rises to 40 hours. Similar tendencies can be expected in patient with impaired liver function; renal function is of minor importance.in this respect. Nitrazepam passes through the placental barrier and enters the milk of nursing mothers.

Sleep disorders: Mogadon should be taken in the evening just before the patient goes to bed.

Adults: 1 tablet (5 mg) in the evening. This is a mean dosage which can be reduced or increased to 10 mg for out-patients or 20 mg for in-patients, depending on the response. Elderly patients: 1/2 -1 tablet. The tablets may be swallowed whole, chewed or dissolved in liquid. Treatment should be as short as possible. Generally, the duration of treatment varies from a few days to two weeks with a maximum, including tapering-off process, of four weeks.

Long-term treatment: In certain cases extension beyond the maximum treatment period ‘ may be necessary, if so, it should not take place without re-evaluation of the patient’s status. Mogadon should be withdrawn for a treatment free period at regular intervals to ascertain whether the therapy needs to be continued. Mogadon therapy should not be stopped abruptly, but trie dose should be tapered off.

These overall amounts should be spread over the day in three separate doses. Such high doses may cause bronchial hyper-secretion in infants with epilepsy. The latter must be examined before treatment is started in order to determine whether the upper airways are clear, Mogadon therapy should not be stopped abruptly, but the dose should be tapered off.

Use as a hypnotic is contraindicated in children.

Tolerance; Some tolerance to the hypnotic effects of benzodiazepines may develop after repeated use.

Dependence: Use of benzodiazepines and benzodiazepine-like agents may lead to the development of physical and psychic dependence upon these products. The risk of dependence increases with dose and duration of treatment, it is also greater in patients with a history of alcohol or drug abuse. Once physical dependence has developed, abrupt termination of treatment will be accompanied by withdrawal symptoms. These may consist of headaches, muscle pain, extreme anxiety, tension, restlessness, confusion and irritability. In severe cases the following symptoms may occur: derealization, depersonalize, hyperactive, numbness and tingling of the extremities, hypersensitivity to light, noise and physical contact, hallucinations or epileptic seizures.

Rebound insomnia: A transient syndrome whereby the symptoms that led to treatment with a benzodiazepine or benzodiazepine-like agent recur in an enhanced form, may occur on withdrawal of hypnotic treatment. It may be accompanied by other reactions including mood changes, anxiety and restlessness. Since the risk of withdrawal phenomena/rebound phenomena is greater after abrupt discontinuation of treatment it is recommended that the dosage be decreased gradually.

Duration of treatment: The duration of treatment should be as short as possible (see Standard dosage), but it should not exceed 4 weeks, including tapering off process. Extension beyond these periods should not take place without re-evaluation of the patient’s status. It may be useful to inform the patient when treatment is started that it will be of limited duration and to explain precisely how the dosage will be progressively decreased. Moreover it is important that the patient should be aware of the possibility of rebound phenomena, therapy minimizing anxiety over such symptoms should they occur while the medicinal product is being discontinued.

Amnesia; Benzodiazepines may induce anterograde amnesia. The condition occurs most frequently within the first few hours after ingesting the product and may last up to several hours. Therefore, to reduce the risk, patients should ensure that they are able to have an uninterrupted sleep of 7-8 hours (see Undesirable effects).

Psychiatric and ‘paradoxical’ reactions: Reactions like restlessness, agitation, irritability, aggressiveness, delusion, rages, nightmares, hallucinations, psychoses, inappropriate behavior and other adverse behavioral effects are known to occur when using benzodiazepines. Should this occur, use of the drug should be discontinued. They are more likely to occur in children and the elderly.

Insufficient data are available on Nitrazepam to assess its safety during pregnancy and lactation. If the product is prescribed to a woman of child-bearing potential, she should be warned to contact her physician regarding discontinuing the product if she intends to become or suspects that she is pregnant.

If for compelling medical reasons, Nitrazepam is administered during the late phase of pregnancy, or during labor, effects on the neonate such as hypothermia, hypothermia and moderate respiratory depression, can be expected due to the pharmacological action of the product. Moreover, infants born to mothers who took benzodiazepines chronically during the latter stages of pregnancy may have developed physical dependence and may be at some risk of developing withdrawal symptoms in the postnatal period. Since benzodiazepines are found in the breast milk, Nitrazepam should not be administered to breastfeeding mothers.

Effects on Ability to Drive and Use Machines:

Sedation, amnesia, impaired concentration and impaired muscular function may adversely affect the ability to drive or to use machines (see also Interactions). If insufficient sleep duration occurs, the likelihood of impaired alertness may be increased.

Mogadon is well tolerated in the recommended doses and has a wide margin of safety.

Undesirable effects that may occur are drowsiness during the day, numbed emotions, reduced alertness, confusion, fatigue, headache, dizziness, muscle weakness, ataxia or double vision. These phenomena occur predominantly at the start of therapy and usually disappear with repeated administration. Other side effects like gastrointestinal disturbances, changes in libido, skin reactions or amnesia have been reported occasionally.                 •

Depression: Pre-exiting depression may be unmasked during benzodiazepine use.

Psychiatric and Paradoxical Reactions: Reactions like restlessness, agitation, irritability, aggressiveness, delusion, rages, nightmares, hallucinations, psychoses, inappropriate behavior and other adverse behavioral effects are known to occur when using benzodiazepines or benzodiazepine-like agents. These reactions have been reported rarely with Mogadon. They are more likely to occur in children and the elderly.

Bronchial Hyper-Secretion/Hyper-Salivation: In infants and young children, as well as elderly bed-ridden patients, bronchial hyper-secretion and excessive salivation leading to aspiration/pneumonia may occur on rare occasions.

Dependence: Use (even at therapeutic doses) may lead to the development of physical dependence. Discontinuation of the therapy may result in withdrawal or rebound phenomena (see Warnings and precautions). Psychic dependence may occur. Abuse has been reported.

Not recommended: Concomitant intake with alcohol. The sedative effect may be enhanced when the product is used in combination with alcohol. This affects the ability to drive or use machines.

Take into account: Combination with CNS depressants. Enhancement of the central depressive effect may occur in cases cf concomitant use with antipsychotics (neuroleptics), hypnotics, anxiolytics/sedatjves, antidepressant agents, narcotic analgesics, antiepileptic drugs, anesthetics and sedative antihistamines. In the case of narcotic analgesics, enhancement of the euphoria may also occur leading to an increase in psychic dependence. Compounds which inhibit certain hepatic enzymes (including cytochrome P450) may enhance the activity of benzodiazepines and benzodiazepine-like agents.

As wifh other benzodiazepines, overdose should not present a threat to life unless combined with other CNS depressants (including alcohol). In the management of overdose with any medicinal product, it should be borne in mind that multiple agents may have been taken. Following overdose with Mogadon, vomiting should be induced (within one hour) if the patient is conscious or gastric lavage undertaken with the airway protected if the patient is unconscious. If there is no advantage in emptying the stomach, activated charcoal should be given to reduce absorption.

Special attention should be paid to respiratory and cardiovascular functions in intensive care. Overdose of benzodiazepines is usually manifested by degrees of central nervous system depression ranging from drowsiness to coma. In mild cases, symptoms include drowsiness, mental confusion and lethargy, in more serious cases, symptoms may include ataxia, hypothermia, hypo tension, respiratory depression, rarely coma and very rarely death.

This medicine should not be used after the expiry date (EXP) shown on the pack.

Keep all medicines out of the reach of children.

Protect from light, heat and moisture.

The tablet can be chewed, swallowed whole or dissolved in liquid.

To be sold on prescription of a registered medical practitioner only.

There are no reviews yet.